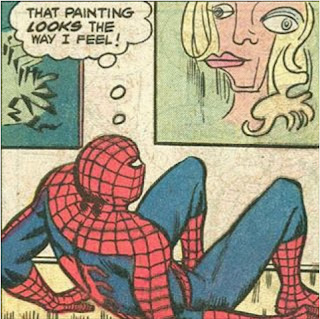 Thank you for reading.
Matthew Sharpe

Harvey, who had been unemployed for several months, went to the modern art museum hoping to clear his head. He found himself in a small dark room where a video was playing on the wall. In it, a blurry woman was doing something ambiguous to her body against a gray background. This made Harvey anxious, so he walked toward the exit of the room, but he accidentally went out a different way than he’d come in. He entered an enormous bright room with a high ceiling. The floor and walls were made of concrete. Tall wooden crates lined the far wall and several forklifts were transporting giant irregularly shaped pieces of metal from one part of the room to another. Not far from him a small gray-haired man and a large red-haired woman were arguing vehemently. “I will not agree to that!” the little man shouted. “I’ll never agree to it!” “Well then I don’t see how this museum can continue to do business with you,” said the woman, towering over him. The man tilted his head back and looked up into her face. “Of course you will continue to do business with me. I am Vladimir Sharkovsky!” The woman’s face turned purple. She squeezed her eyes shut. When she opened them she saw Harvey standing a few feet away. “Oh, Mr. Devlin,” she said, “you’re here, thank God. Maybe you can settle this for us.” She beckoned Harvey to her and when he arrived she grasped his shoulders and kissed both his cheeks. “Devlin,” Sharkovsky said with stiff cordiality, and held out his small hand, which Harvey shook. The woman said, “Mr. Devlin—may I call you Edward?—as you can see, we’re at an impasse. Help us.” Harvey was a people person and he said, “I don’t think you’re going to make much progress now, you’re both too worked up. Why don’t you sleep on it and meet again tomorrow?” “What do you say, Vladimir?” Sharkovsky looked warily at Harvey and then at the woman. “Fine, Gladys, but I thought we were going to sign the contract and have a celebratory drink, so I’ve got two hours to kill before my driver comes to pick me up. What the hell am I supposed to do now?” He stared at Harvey. “Oh, no,” Gladys said, “you can’t just ask Edward Devlin to babysit you.” But she, too, looked askingly at Harvey. “I don’t mind,” he said, “let’s go for a drink.” Soon he and Sharkovsky were sitting at the bar of the chic hotel across from the museum. Sharkovsky had the bartender line up three double whiskeys for each of them. They downed one together and Harvey stopped but Sharkovsky drank his second. “Something is weighing on you,” he said. Harvey said, “I lost my job a few months back. I’m not Edward Devlin.” “Of course you’re not. No one is. Gladys does that all the time. What was your job?” “Car salesman.” “Pshaw. I have a new job for you.” “What?” Sharkovsky gulped his third double whiskey, ordered two more, described the job, and made a salary offer that surprised Harvey. The drinks arrived and Sharkovsky drank them. “Sir, that’s flattering, but I come from a small town and go to church every Sunday. And I don’t know how my wife would feel.” “Yes, your wife. We must go and ask her permission, but you’ll have to help me up, I’m blind drunk.” Harvey helped the staggering little Sharkovsky to his car and drove him out to the suburbs. When they arrived the twins were in their high chairs at the kitchen table and Ernestine was feeding them their supper of cream of broccoli soup. “Ah, Ernestine, you are just as I pictured you. And the twins! I love this family!” The artist was holding onto Harvey’s elbow for balance but speaking clearly. “Vladimir Sharkovsky?” Ernestine said. “I studied your work in college. You’re amazing.” Sharkovsky looked bored, then announced his intentions with regard to Harvey. “You’re going to use Harvey—Harvey Marmle—as your model?” She laughed and slapped the table and laughed some more. “Don’t you ever—” Sharkovsky roared, “disrespect this man! He is your husband!” Ernestine silently shed a few tears. The twins cried and Harvey went to quiet them. “You’re right, Mr. Sharkovsky,” she said. “I’m sorry, Harvey, it’s just, I’m here all day with the twins and I get slaphappy while you’re out doing God knows what.” “Well today I got a lucrative job,” Harvey said, sulking. Sharkovsky, clinging to the stove, said, “No, it is I who must apologize, Ernestine. I understand how much strain economic hardship puts on a marriage. My father was a successful shoe manufacturer until Stalin sent him to the poorhouse, then to Siberia and his death!” Sharkovsky’s eyes now also leaked tears. “But please, Ernestine, Harvey, promise me you will always respect each other. Respect is paramount. Here,” he said, reached with a shaky left hand into the inner breast pocket of his blazer, removed ten $500 bills folded together, and handed them to Harvey. “Your first week’s pay.” He then pivoted toward the stove, vomited into the remaining cream of broccoli soup, crumpled to the kitchen floor, and lay there unconscious. Ernestine rushed to Harvey, wrapped her arms around him, and pressed her whole body into his. “Congratulations, my husband. I’m so proud of you.”

Posted by Matthew Sharpe at 8:06 AM